Why should we install a changing places?

I can understand that many people have not heard of Changing Places toilets. I understand there’s a valid argument that venues just don’t know about them.  However once they do know….?

I worked in architectural practice up until 2010, just after the guidance was entered into the British Standards (BS 8300), and I honestly hadn’t thought about the building regulations ‘standard unisex accessible WC’ not being adequate for all disabled people.  Don’t ask me how I didn’t know as it seems so obvious now, but it just hadn’t occurred to me what people would do if they couldn’t get onto the loo on their own ! How could someone help to lift them in that little room and without any hoisting equipment!?  And what if you were not a baby (maybe you’ve not been a baby for decades!), but wear an incontinence pad and need assistance to change it? Where would you lay down? 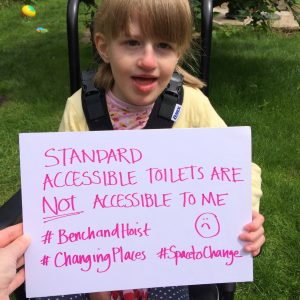 It wasn’t really until my daughter was growing too big for baby changing tables that I began to wonder if I was missing something, and of course when I began to look around I found the Changing Places campaign.  A campaign that had grown out of the frustrations of a determined bunch of parent carers deciding to take action about this lack of provision.

I was excited to find that they had secured a pretty comprehensive entry in BS 8300, recommending the type of buildings these facilities should be installed in.  And there is also reference to this BS guidance, and to the Changing Places Consortium, in the Building Regulations relating to building accessibility (Part M).

However it soon became clear there really weren’t that many of them actually installed.

Ok so it’s a new standard?  There will be loads in the pipeline right?

Now that the need has been identified and quantified in BS guidance, there will be lots of new buildings automatically including them, and lots of existing venues will start installing them…. right?….right!?  Erm….no, not really.

Over the last year or so I’ve gotten to know a number of campaigners pretty well, several of them are fellow SWAN UK members with children with complex undiagnosed conditions, some have older children and some are adults who need the facilities themselves.  Unfortunately their experience has been negative on the whole.  Of course there are some exceptions and some lovely positive stories of venues, on hearing of the need, step up and even enthusiastically take steps to ensure a changing places toilet is installed in their new building or refurbishment.  Some see the benefits of inclusion straight away without much, or even any, persuasion.  Two such projects that spring to mind are Longdown Farm and Cornwall Services – both fantastic examples of how it should be, how I’d have expected it to be.

However the far more frequent response seems to be: “not our responsibility”.  Even when confronted with the fact that their disabled customers & carers have to leave early, risk falls & back injury, lay on toilet floors or even not come at all, the fact that changing places are not compulsory, that there’s no minimum requirement to cater for ‘our kind’ of disability, means that venues see changing places as an extra. Something over and above what they need to provide.  Their competitors haven’t had to do it so they don’t want to be the ones who have to spend the extra money.

I have to say I have a little sympathy for this.  The changing places standard is significantly bigger than designers and developers are used to as an accessible toilet, and of course floor area = cost.  Without clarity of who should install them, and in this financial climate, I can sort of understand individual organisations backing away from responsibility.  My feeling is that there should be a review of the whole ‘suite’ of sanitary facilities we have in our regulations as minimum standards.  I think there’s opportunity to have more inclusive options, for smaller family friendly venues for example, where perhaps the adult and baby changing areas are not put in separate rooms but a single family toilet area is installed, so the room will be used by a greater number of customers and business’ will feel there is more ‘value’ in if for them? But that’s another blog post I think!

As I say, these facilities seem to be viewed (by most?) as an ‘extra’, as something for a minority and not their responsibility to cater for, so thought I’d look at some figures I could find online which (I think!) illustrate clearly that’s not the case (although even if it’s just one person that’s being excluded, isn’t that one too many!?).

The Changing Places Consortium website tells us there are over ¼ million users in the UK who need a greater than the average accessible toilet, in a population of 65.1M (ONS).

1 in 260 may not sound like a huge number of people on first glance, but just to put that into a bit of context, here are some building venue capacity stats:

Blackpool Tower Ballroom (who do have a changing places toilet I must add – #IncLOOsion!) can accommodate:

Wembley Stadium (who, again, do have a changing places toilet) has:

For an area with such high density of entertainment & tourist venues, the west end of London has particularly poor provision of changing places, and I don’t mean to single out these two over any other (because they ALL should have one) but, for example:

The Odeon at Leicester Square has:

So, some of my questions to businesses who are questioning whether they should have better accessible toilet facilities in their building or venue are:

I’m not suggesting tiny coffee shops should be expected to provide fully accessible facilities (although of course that would be lovely and very inclusive!), and perhaps some people may say I am too close to the issue to see it objectively, but I am really struggling to understand why there is any debate as to whether meeting this need should become a minimum requirement in larger publicly accessible buildings, ones that provide toilets for everyone else!