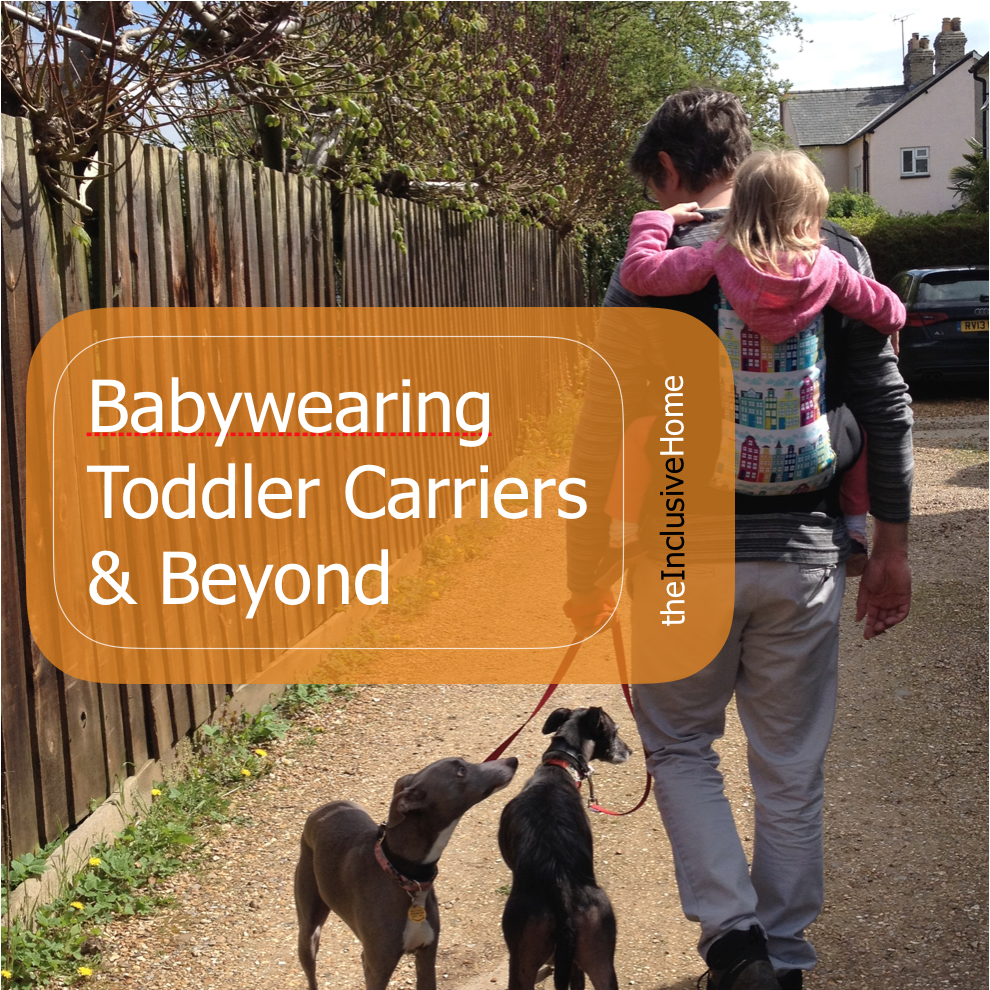 People have been carrying their children around for as long as humans have existed! There are comparisons everywhere for modern baby wearing, and fabric wraps are still commonly in use in the traditional way in various communities, but which parent (anywhere!) hasn’t carried a little baby around when it doesn’t want to lie down, or picked up a tired (usually grumpy!) toddler and carried them on their hip (giving you a wonky posture and a numb arm in the process), given them a piggy back or popped them ‘up top’ (as W calls it!) on your shoulders!?

So if you are going to carry a little one anyway, I say, make it as comfy as possible for both of you!

(This post by NCT gives some good basic safety advice for starting out with carriers.) 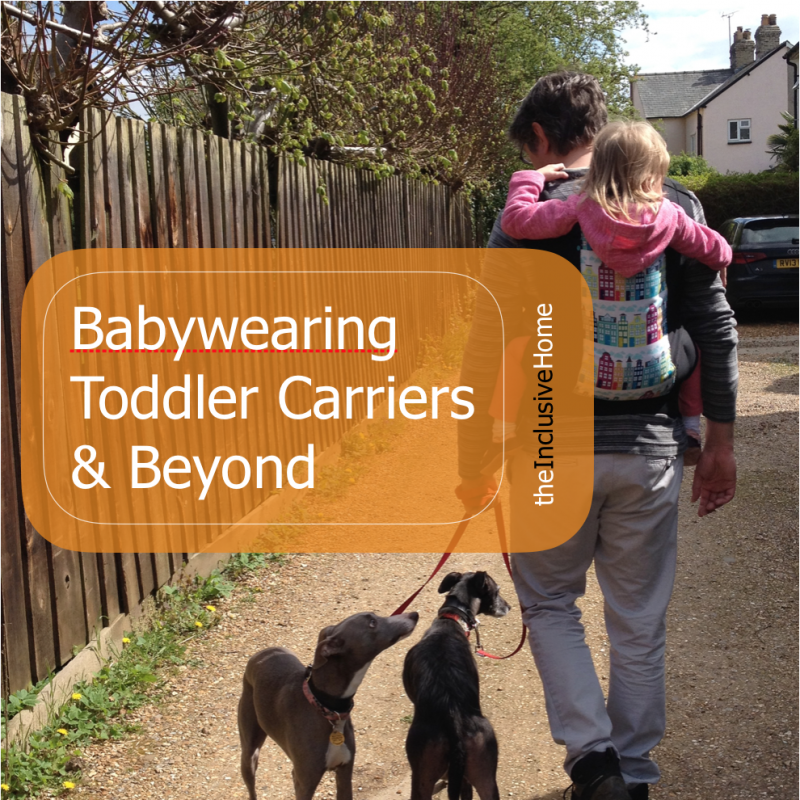 Baby wearing has been brilliant for us and I’d go as far as to say that at various stages, and for various different scenarios, I couldn’t have done without my carriers!  So after digging out our pre-school carrier, for a slightly poorly tired W over half term, it prompted me to get writing about our experience of baby and child carriers from our, slightly non-traditional, perspective.

When J, was born we didn’t know she would have disabilities (that was something that gradually transpired as she began to miss the typical developmental milestones), so we started out as an average new family with all the typical new baby gear recommended by F&F and by the baby mags and websites, including a high street baby carrier.

We lived in London at the time, so I quite quickly decided that ‘baby wearing’ was not only nice and snuggly for me and baby J, but so much more convenient than the pram, for public transport around the city and for out walking the dogs on the common.

One of J’s first symptoms was pretty severe reflux, so the baby carrier also became a useful tool, for holding her upright to help her digestion, and allow me to be hands free to get things done around the house.

However despite being small, J soon got too heavy for the type of carrier we had and it only allowed front carries (it was a Baby Bjorn original with no waist support and my shoulders began to feel the strain), so I began researching other options, spotting what other parents were using and, when I began googling, I found a whole new world I didn’t know existed!….. From fully framed backpacks, through to soft structured carriers, ring slings and traditional fabric wraps!

There are so many options and lots of pretty colours and fabrics out there! It’s easy to see how wraps and carriers could become the new shoes and handbags in some households!

I was very pleasantly surprised to find that the ‘baby wearing community’ is pretty open to carrying larger children of any ability and I also found some really helpful advice in that community and in some of the SEND support groups I belong to!  You can also go along to ‘sling meets’ and ‘sling libraries’ where you can try some out and get some experienced advice.

In the end we invested in a number of different carriers to suit different situations and sizes of children, and I went for both a simple ring sling and, over the years, several sizes of soft structured carriers (SSC) in baby, toddler & preschool sizes!

The ring sling, by Amazonas, was brilliant for hip carries for quick trips in and out of the car or carrying one or other of the children around the house.  It’s really quick to use, but with a bigger child it’s not really very comfy for long periods as the weight distribution is a little uneven, through one of your hips and your opposite shoulder.

We have had lots of use out of all 3 of our SSCs! They allow quite a lot of flexibility, but easy to understand, with shaped panels, safety clips and adjustable straps so you’re reassured that you are ‘doing it right’! The weight is taken mostly through the waist strap to your hips, so really helps reduce back strain, and most are suitable for both front and back carries too!

We used our first, Beco Baby Carrier, for probably longer than we should have.  J’s weight never went above the limit, but in height and leg length it became uncomfortable (one of the key comfort factors for the child is to have a good M shape to their legs, so their bum sits a bit lower in the seat and their thigh’s are nicely supported by the carrier with their knees a little higher), so we moved straight on to a Rose and Rebellion pre-school carrier when W came along. However in the end we also got an in-between size,  Tula Toddler Carrier when W outgrew the Beco too, so that my husband and I could continue to carry one of the children each!

Other options I mentioned above, are traditional fabric wraps or framed back packs.

I have always been a bit daunted with tying a traditional fabric wrap (although I did in the end get a lovely stretchy Boba wrap for W when he was a newborn), but I think by the time I was looking for a new carrier for J, wrapping wouldn’t have been right for her anyway. I think wrapping (particularly for back carrys) requires a degree of cooperation and balance from the little one, which J wasn’t able to do (at 9 months, she wasn’t able to sit unaided, and her hypotonia and hypermobility were beginning to become more apparent).

By comparison framed back packs are really easy to get the child into and out of when you are on your own, and quite often have space to carry other stuff in them, however they are only suitable for back carries and I always thought they looked too bulky for us for daily use.  SSCs, Wraps and Ring Slings have the advantage of being foldable to be popped in a bag just incase they are needed!

As I mentioned, the carriers have helped us to get out and about in various ways in different scenarios!  Here are a few that I can think of:

Another nice thing about carrying children is that you can chat much more easily than when a child is in a buggy, which is fantastic for communication, you can more easily to point out sights and sounds, or to quietly sing to them if they are poorly or unsettled!  It also gave J a different experience to that of being in the wheelchair, higher up for a different perspective on her environment, and allowing her to experience things in the same way as her brother when he is up top!

J’s brother W is now (at almost 4) is pretty self sufficient at walking or scooting, but I still keep a carrier in the car so it’s there, just for days like we had during half term, when he’s a bit poorly, or if we’re going on a particularly long walk.  I have also been known to carry J still, for short but wheel unfriendly walk, or when she’s a bit under the weather and needs a good cuddle!

And last (but definitely not least!), it’s lovely for mum and dad continue having those snuggly hugs as long as possible (with less risk of doing yourself an injury!)!

19 Replies to “Baby wearing, toddler carriers and beyond”