We said goodbye to EJ’s standing frame last week (the monkey – imaginatively named after the big plywood monkeys which sandwiched her). EJ is getting much stronger at standing up herself, so we prefer to practice dynamic standing with her, supporting her to play at her little kitchen or trying to encourage her to cruise. She has also ‘graduated’ into a gait trainer/walking frame (although at the moment she mostly sits down in it!) and has begun taking a few steps at a time. 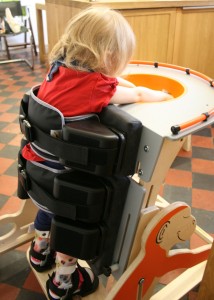 EJ hasn’t been using the monkey for a while, so it has been kicking around our kitchen tripping me up and generally getting in the way (they are not small things!). I was really looking forward to it being taken away, help another little person, and give us some much needed space back (the gait trainer is also not a small thing!). However, as I was giving it a wipe down, and checking all the bits were there ready to be picked up, I got a bit emotional!

EJ’s condition is not something that we knew about when she was born.

All her antenatal tests were all ‘normal range’. There were a few hairy moments during labour and her birth and in the first few weeks, some of which prompted the paediatrician to order some chromosomal tests before we left the hospital in the first week, but they came back ‘all clear’ – oh ok!? – she was just a typical new baby then?

EJ began missing the milestones in the little red book and falling behind her little baby peers. It was noted at her first couple of checks but we were told it was probably nothing, they all develop differently (true), she is just a little delayed and a little floppy (I guess….?), it could be her her reflux (oh! that make sense), it could be the hole in her heart making her body work harder (so when that’s repaired……?)…..

She was medically ‘normal range’ but she wasn’t following the charts, she wasn’t keeping up with her peers and she didn’t have the muscle control she should have by now. It was never made clear that actually it was quite common for children with genetic conditions to get an all clear on the tests currently available (approx 6000 a year in fact!). Nobody said to us (given her symptoms) that it was highly likely she had some form genetic disorder no matter what the results of the tests. We were left feeling confused, even neurotic and paranoid, with nowhere to go to ask. The doctors were all great individually, and of course asked us if we had any questions, but we didn’t really know what the questions were!

It was when EJ was around a year old that we began to gather a selection of different specialists, referrals to therapists, and there were talks of developmental delays and low muscle tone, more tests (all with normal results). No use of the term disabled…… (so she’d catch up – right?)

The monkey arrived when EJ was about 21/22 months (shortly after she had begun to sit up unaided at 18 months). It was the first proper ‘disability aid’ that we had. Looking back now I suppose it was a symbolic moment in time. A tangible, physical object that marked our change in perception of how things were and how things were going to be for us. The way our lives were moving in a different direction to that we’d imagined.

EJ did have additional needs. She didn’t fit the baby book formula.

We continued going to mainstream toddler groups (and still do go when we can, as I think inclusion is very important for both EJ and for the other children) but until now we had been trying to fit in, conform, but we were really on a very different road. We couldn’t join in with the usual new parent chat (weaning, crawling, first words etc).