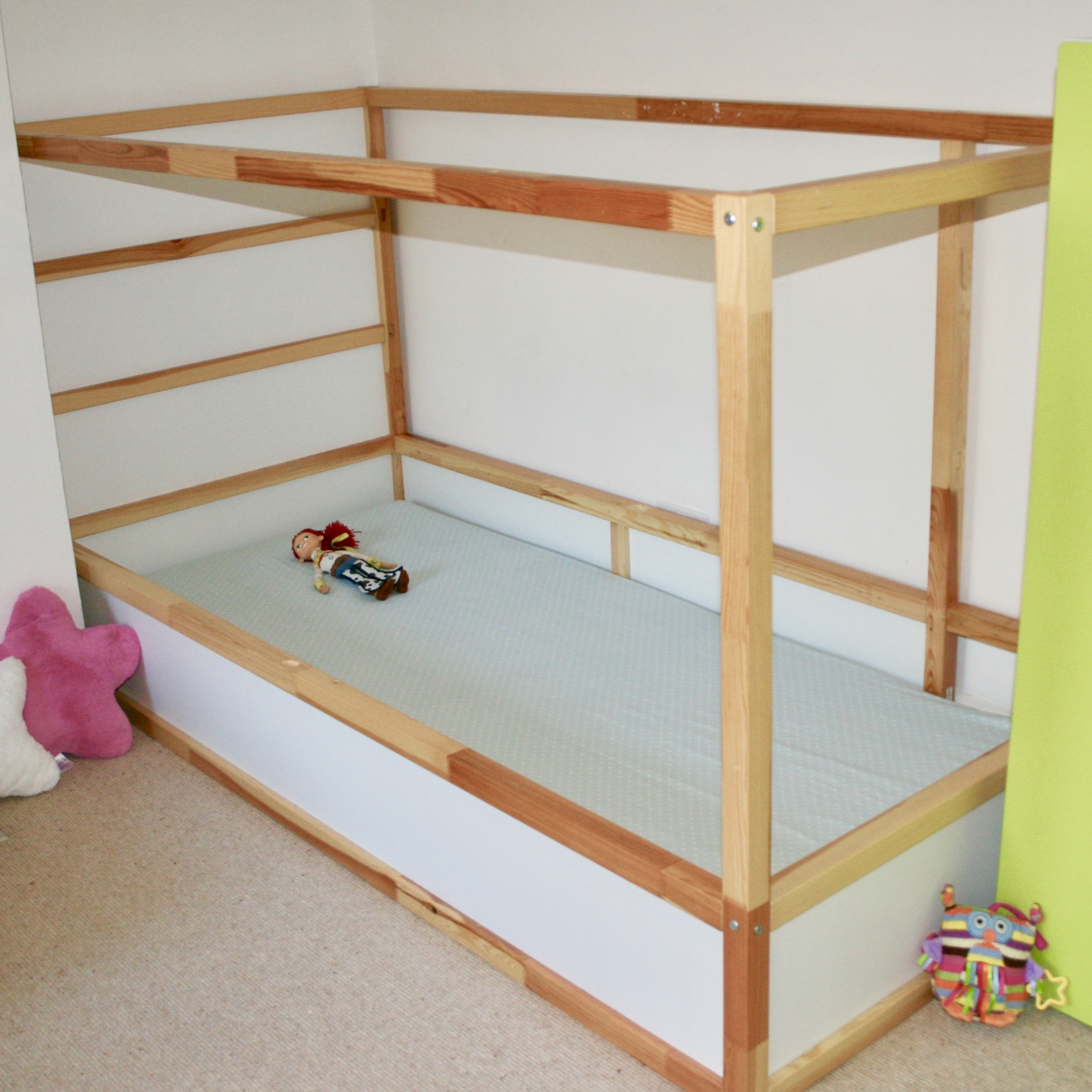 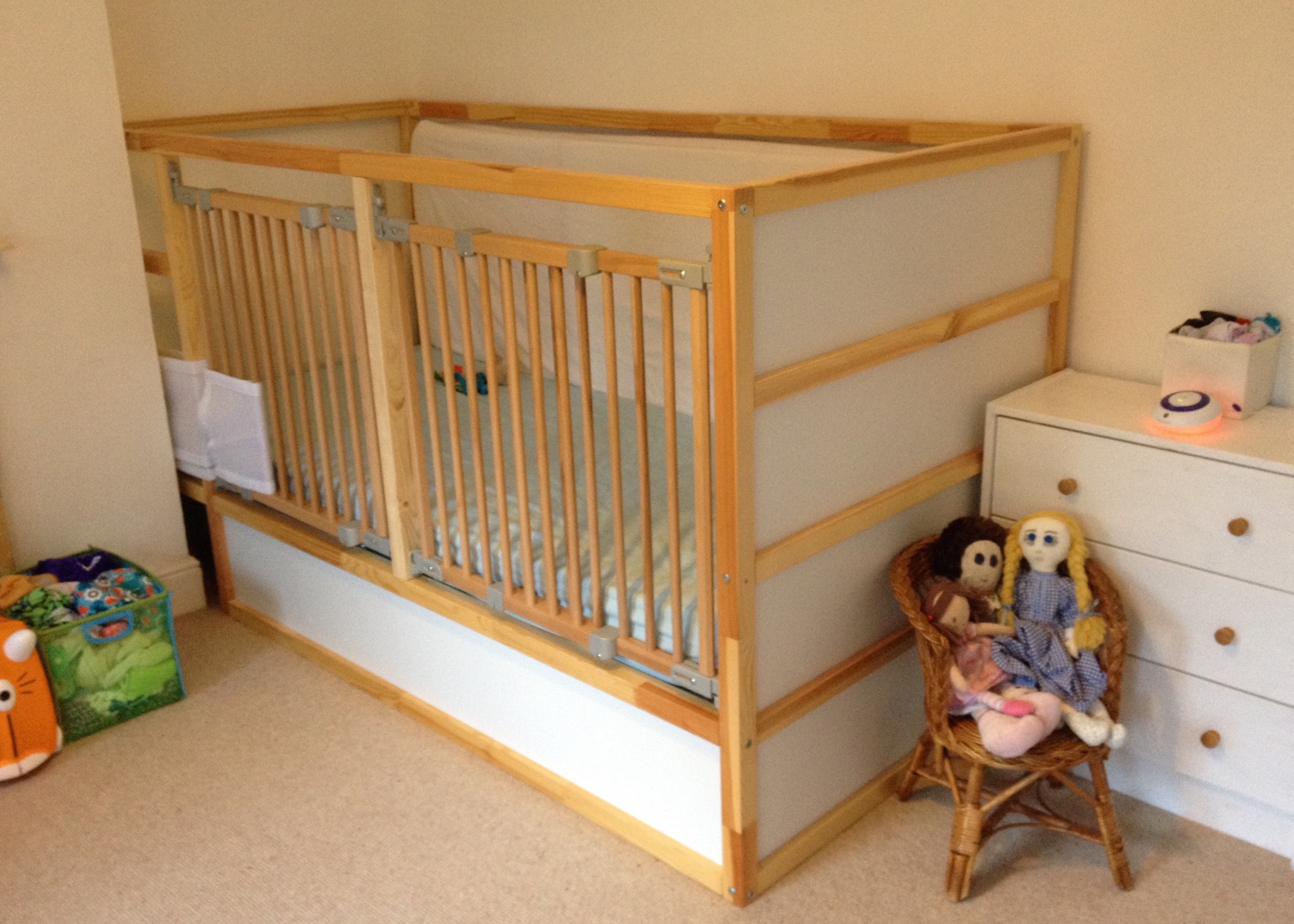 We have just had a bed reshuffle in the house and everyone seems to be much more comfortable and settled – hurrah!

Twinkle has sensory issues and it often takes her a long time to settle at night, particularly on a busy day of sensory overload.  When she began rolling around proficiently (at around 18 months) she began to wriggle around her bed before dropping off to sleep and began get herself stuck horizontally across her cot. Then (as now) she still need the security of a full length bed guard to prevent her from rolling out.  We discussed her needs with her OT at that time, but as she was still only little and many of her contemporaries also still sleeping in a cot, we decided against a specialist bed in favour of the biggest cotbed we could find (by Boori)!

However, now at 5 years old, EJ still needs the same security of a bed guard but is a bit too tall for the cotbed and getting too heavy to be lifting up and over the side.

We also have her 2 year old little bro to think about, who was still sleeping in the original little cot (well he was supposed to be sleeping in there, but he hated it and usually ended up sleeping in the spare bed with me!).  He has been in the queue for some time to move into the big cotbed as soon as we found a better solution for Twinkle.

Again we looked around at some of the specialist beds available.  It’s so difficult to know what’s best as Twinkle’s future needs are not really clear, but we still feel (for the moment) that most special needs beds provide far more functions than EJ really needs.  We have found with bed choices, like many things, there are little or no solutions in between the standard mainstream offering or the full electric high/low and profiling specialist beds (which of course also come with a very weighty price tag!).

So we decided to try an Ikea hack! 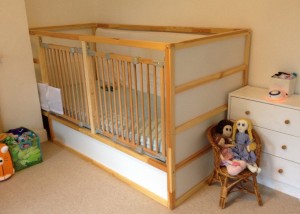 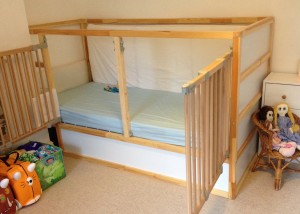 We bought an Ikea bed a few months ago.  A reversible (high or low) bed with a good frame which looked like it should allow us to add some side guards in some way.  We mulled it over for a while and considered lots of different options until one day I looked at our stair gate and thought, that’s it!

So the ‘ingredients’ for our hack are:

We built up the bed following the standard instructions (we love a flat pack in our house! – like grown up lego).  The bed comes with one solid end, so between the two corner walls and this solid panel, there is only one long open side left to deal with.

We got a length of wood (in the same dimensions as the bed frame) and cut it down to fix it in the centre of the long opening to form a little column in the middle of the frame.  This gave us two ‘door’ openings to fit our two stair gates into.  Fortuitously the height of the gates is just right to fit into the openings without leaving too large a gap at the top or bottom to get a head stuck in!  (For balustrades gaps should be no wider than 100mm.)  In fact the gate sits low enough at the bottom so that the mattress overlaps any gap there.

Twinkle moved into her new bed at half term and so far it’s been great!  She has so much more space and having two gates that can be opened individually or together, means it feels much more open and accessible than the cotbed was – not to mention so much easier on my back when helping her in and out!

We have accessorised it with an old crib mattress as a padded headboard and have used one of our guest bed cubes from the Futon Company to provide a padded surface side stop any bumps against the wall.

The only negatives are that the top of the bed frame is quite low, so although it’s great for framing the stairgate, it’s just at the right height for an adult to bang their head on!

Also, the bed is a little high off the ground just now for Twinkle to reach the floor from sitting on the edge.  She can’t get herself in and out on her own yet, but it would be nice to be able to practice climbing in and out, so we may need to add a little step or platform.

It provides just the level of protection that Twinkle needs, i.e. prevents accidental rolling out of the bed.  I think if she begins to pull herself up to standing or trying to escape we’ll need to rethink.  However since it’s a standard bed we figure, if it doesn’t work in the long term, EW can have it as a cabin bed when he’s bigger and we can revisit our options for Twinkle. 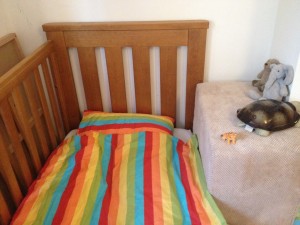 Meantime the little dude is loving his new cotbed.  We have taken one side off and found yet another use for our other cube bed, wedged between the cotbed and the chimney breast, as a half bed guard for EW (I’m going to have to do a 101 uses for a cube bed post at some point!).  He’s loving the freedom of being able to get in and out of his own bed and is actually sleeping in it most of the time!

= More sleep for me! Hurrah!