The very nature of an undiagnosed condition (a Syndrome Without A Name) is that it is not the same as any other that’s been identified.

Of course, every single one of us is different (whether deemed to have any physical or mental health condition, disability or not). And people who are diagnosed with a syndrome can be affected by it in very different ways (in the case of rare disease there may be very little known about the condition at all!), so diagnosis rarely gives a full picture.

And perhaps there are disadvantages to being ‘labelled’? Largely around preconceptions and conclusions that are leapt to about how YOU may be affected – when in reality there’s likely to be a huge variation from person to person.

However there are advantages in diagnosis too, which I’d say outweigh the disadvantages no matter how rare the condition, not least because it can help to stop you slipping through the cracks. 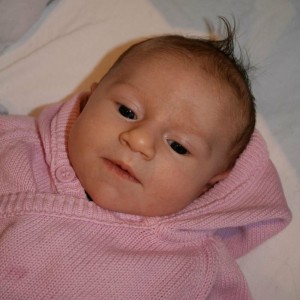 My antenatal tests gave no indications that EJ would be anything other than ‘a normal healthy baby girl’ – a commonly used phrase, and one that pregnant women are so eager to hear.

In the past perhaps I hadn’t really considered the implications of the phrase, how it separates ‘normal’ from, from what? abnormal? different? unique?!

As a phrase it now it tends to make me wince, because….

Indeed, what is ‘healthy’!?

When EJ was born, a few ‘issues’ rang some bells with the neonatal paediatrician and he ordered chromosomal blood tests while we were on the maternity ward.  These came back ‘within the normal range’ so we were sent home reassured there was nothing ‘wrong’ with our new little baby bundle.

I can totally see how at this stage, with no evidence to suggest EJ wasn’t going to follow the typical child development path, it wouldn’t necessarily have been appropriate (or indeed helpful!) to launch into the full complexity of genetics and confuse a couple of tired and anxious new parents.  However there was obviously in inkling there…..

…..and very gradually EJ began to collect more symptoms, including missing most of the typical development milestones, and her differences became more & more noticeable the older she got, and she began to stand out from the baby crowd.

The added complexity for us was that we moved NHS trust when EJ was 6 months old, so we had to start afresh with a new set of health professionals. Our GP notes of course would follow, but not instantly, and apparently notes and test results from hospitals don’t, they have to be requested specifically!

Thankfully we found our new GP surgery to be fantastically supportive and EJ was referred to our new hospital without fuss.

We then embarked on a very confusing journey of test after test, normal results, clear scans and more normal results.  Being passed from one department to another, in and out of hospital clinics and community services.

EJs symptoms (even her heart defect) could be related to ‘normal’ paediatric issues, so rather than being joined up, as they would more likely have been had she been diagnosed, were left feeling confused, even neurotic and paranoid about reading too much into things.  We didn’t really know what questions to ask or even who to ask…..

We were also left feeling guilty and worried that perhaps we had done something wrong? Being asked by every new clinic the same questions about her history, even going over and over how my pregnancy had gone – did I drink or smoke or take drugs in pregnancy? – is all pretty guilt inducing! We’ve even been asked several times if me and her dad are related! – I know these questions have to be asked, but perhaps once is enough….? Perhaps a clear crib sheet at the front of medical notes!?

And all the while (we had a lot to take in, so unless things were spelled out it may have washed over us!) I don’t remember anybody saying (given her symptoms) that it was pretty likely that EJ did have some form genetic disorder no matter what the results of the tests.  In fact I’m not even sure how many of the non medical professionals involved were aware that living with an undiagnosed condition is such a common state of being, sometimes not just a stage while you wait for meaningful test results (6000 children a year are born with an undiagnosed condition!)….I’d even hazard a guess that some may have suspected it was all in our minds…. as they (like us!), would have expected something to have come up in some of the tests EJ’d had.

The health, social care and early years education system can be complicated and confusing enough for anyone, but I think where having a child with an undiagnosed condition differs from those with known syndromes, even rare ones, is that without a ‘name’ you feel like you are constantly trying to convince people that there really is ‘a thing’.  Whether that’s a thing (as for EJ) affecting her sensory processing and in turn her development, or a thing linking a group of medical problems together. Many, like us, feel isolated, perhaps not feeling like you qualify to join ‘additional’ needs groups (but can’t relate properly with mainstream), don’t qualify for help, and that perhaps you are a fraud for taking up valuable NHS time?!

Many undiagnosed children have extremely complex medical needs, many from birth or even before they were born, so unlike EJ will have been ‘in the system’ from the beginning – but, from what I understand, this doesn’t necessarily mean care is better co-ordinated.  For many, one medical symptom will dominate, and that medical specialty might take the lead in fire-fighting that need, but they are not necessarily the right team to be investigating the cause and leading on the overall care of the child.

I really don’t mean any of this to sound critical of any of the individual people, teams or clinics involved, or indeed the NHS or social care. Far from it! Overall we have had wonderful care!  We really do understand the massive strain and funding constraints on the NHS and social care, and the limitations of working within a framework of approved techniques, medications and therapies.  However that’s not to say there couldn’t be big improvements in coordination of the care, particularly for patients with undiagnosed conditions.  More coordination could also bring more efficiency (and less frustration!) for all involved, freeing up those in the caring and medical roles to ditch some of the admin and get on with what they want to do, providing support, treatment, therapy etc

With many known syndromes there are often typical symptoms and treatments, and you’d be put in touch with key teams, relevant tests carried out and early intervention therapies begun from the start with a coordinating specialist overseeing the care.

With a rare condition a plan is less likely to be in place, but at least there is a focus, something tangible even if still confusing.  There is likely to be medical research going on, some interested specialists (which can never be the case for undiagnosed patients as they are all so different, we are all hanging around hoping to grasp at the coat tails of some identified condition).

Being diagnosed also gives you the opportunity to meet and engage with other families in a similar position, however few of them there are.  It’s such a human need to be able to share experiences with others who understand – which is why SWAN UK is so important to us undiagnosed families, because although we are all so very different, we do share challenges and the confusion of the unknown.

EJ’s long list of symptoms don’t really help give a full picture of her condition since they can be attributed to many other known syndromes and ‘normal childhood issues’ which means that we don’t know what the future might hold.  In many ways I find this liberating, as there are no preconceptions about what her life and achievements will be.  However it also raises difficult questions – Will she walk (what adaptations will we need to make in our home)? Will she talk (will we ever be able to communicate)? Will she be able to live independently (how much support or not will she need – what happens when me and her dad are gone!?)? Will she develop any associated health problems? Will she have a shorter life expectancy (actually I don’t think I want to know the answer to this last question!)!!!?

Genetics is just so bloomin’ complicated!  We’re just at the tip of the iceberg in this area of medical research and, in the meantime, a long way to go to make sure it is acknowledged across the board that even if the tests don’t find an answer, it doesn’t mean there’s not a genetic glitch hiding somewhere, and that the family affected still needs the same level of help, support, treatment and therapies as those who are diagnosed with known conditions.

Last Undiagnosed Children’s Day a very exciting announcement was made for a new Roald Dahl SWAN nurse post at Great Ormond Street Hospital (there’s a great clip on this link of an interview with the super campaigner behind Just Bring The Chocolate about the new position).  And also since then two new specialist nurse positions at Birmingham children’s hospital for a rare disease specialist nurse and a genetics specialist nurse!  We in the SWAN community are holding our breath hoping these new roles will show the NHS just how much of a difference these coordinating speciast roles can make  – and hoping they can be replicated at all the children’s hospitals and major teaching hospitals….. no pressure new recruits!

In parallel it’s so important that awareness is spread generally, and among frontline professionals that will come into contact with new parents (midwifes, health visitors, SENCos etc), that being undiagnosed is actually a ‘thing’ and that there is help and support out there in the form of SWAN UK!

This blog post forms part of an amazing series by SWAN parent bloggers for Undiagnosed Children’s Day 2016.  Check them out via the blog hop link below!