It’s so easy to get so absorbed in the nitty gritty of the day to day, that you can miss seeing all the little achievements and milestones that you’ve reached.  2017 was not all cupcakes and rainbows of course, but I thought I’d take a look back at some of the big the positives from the past year, and I’m pleasantly surprised at how much I wanted to try and fit into this post!

2017 started with a lot of talk about accessible toilets, thanks in the main to the amazing Anne Wafula Strike for speaking out about a horrible experience she had on the train. 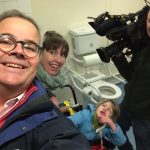 This media attention lead to our family being featured in a little film with our local BBC new channel, which I wrote about here, and throughout the year changing places toilets were in the news on various occasions, thanks to the clever ideas of fellow campaigners! Most recently Hadley’s Hero’s amazing #LooAdvent making The Last Leg and being featured on the Jeremy Vine show on BBC Radio 2!

This year I’ve been trying to learn as much as I can about the origins of the changing places toilet standards, the research they’re based on, meeting various (official & unofficial!) campaigners and the processes for contributing to legislation changes.

This included contributing to a number of different government consultations, something I’ve never done before, but really interesting to have potential to help influence policy & standards!   The main ones this year being an inquiry by the Women & Equalities Committee which enabled me to contribute to the discussion on both accessible housing and changing places toilets (my two favourite themes!) – I even got a little mention in both those sections of the Disability and the Built Environment Inquiry Report, so it was definitely worth doing!

The other main accessibility consultation of the year being on the draft of BS 8300, the British Standard document which deals with accessibility of the built environment.  I’m afraid I was a little underwhelmed by the accessible toilets section and still feel that it reads as though some disabled people are Slightly Invisible when it comes to inclusion.

2017 saw us also actually encountering our first 3 (!) real life changing places toilets!: Grand Arcade multi-storey car park in Cambridge, Mid-Suffolk Leisure Centre in Stowmarket and Kirroughtree Visitor Centre in Galloway Forest Park – We actually travelled over an hour off our route home from Ayrshire to Cambridgeshire to visit Kirroughtree, as we wanted a family friendly car break, with facilities we could ALL use!  Very exciting and liberating for us, but when I try and put it into context with how many toilets (that other people can use) that we may have encountered in all the other places we visited throughout the year (can’t even begin to count!?) it’s a little soul destroying that we are still where we are. 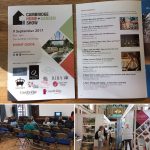 I also want to give a huge thanks to Jennifer of the Cambridge Home and Garden Show for being so supportive of the concept of inclusive design and featuring it within the first show of it’s kind in Cambridge! I’m not sure how good I job I managed to do (speaking is not really in my comfort zone!) but I gave a little talk about the benefits of inclusive design for everyone! I would love to be involved in the show again in the future, and may look towards taking a stand at this or other similar events to give advice to householders on how they could maximise the potential accessibility of their homes to make them welcoming to all of their family and friends! 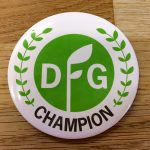 Another housing thing I went along to this year was a DFG Champions Roadshow, run by Foundations HIA, to help link up professionals keen to improve the DFG (Disabled Facilities Grant) process.  It was interesting to see all the work going on behind the scenes and the efforts going on to improve things all the time.  As someone slightly on the edge of the process it was really nice to be welcomed into the Champions, and my ideas and experiences welcome in the debate.  Some of the info from the roadshow I attended, and the others that have been held can be viewed on the Foundations website.

A massive surprise early last year was that I was nominated in the inaugural BAPs Awards, in the Campaigning For Change category! The awards ceremony (hosted by the fabulous Sally Phillips!) was a fantastic night and it was so lovely to meet so many amazing people all out there making the world a more understanding and inclusive place! 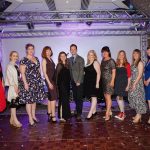 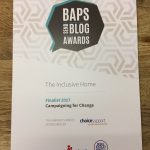 At the end of the summer, as a family, we attended Parallel London for the first time! It was awesome! A properly inclusive event and family festival! The motto for taking part in the races was, “start together, finish whenever”! We took part in the sensory 1K designed by the brilliant Joanna Grace (@jo3grace) and J and I walked the last 50m!  It was extra touching that Joanna welcomed J over the finish line (see the bottom left image in best nine pic above)!  Parallel London is definitely on our ‘things to do list’ again in 2018, I couldn’t recommend it enough!

In the summer we finally bit the bullet and decided to invest in a new car.  A Wheelchair Accessible Vehicle (a WAV), but if we were going to buy get a bigger vehicle we decided to go the whole way and make it work for us in as many ways as possible…. so not just a WAV, but a CamperWAV!  We’ve only managed to stay away one weekend in it so far, but have lots of adventures planned for this year, and it’s been invaluable for other reasons too! (Check out the CamperWAV tab above to find out more!)

And finally we had some amazing family experiences over the year, from lovely days out and holidays to milestones reached by my little lovelies! The biggest being J mastering pulling herself up to stand all by herself and the biggest for her little bro was finally braving putting his face in the water at swimming lessons!

So as we step into 2018, I’m looking forward to progress with my campaigning and lobbying for better accessible toilet standards & to reaching a wider audience with the concept of inclusive home design!  We have finally had some concerted time to get our own ‘inclusive home’ plans back on track and hope to be able to get on with the actual construction work to our house in the Spring/Summer!

Here’s to a more inclusive and accessible 2018!